From the early days of the Republic of Texas, mineral-water springs and wells attracted health seekers. Sam Houston bathed his wounds in the waters of Sour Lake in Hardin County and in the sulfur springs of Piedmont in Grimes County. Davy Crockett is said to have visited the Texas Sour Wells in Caldwell County. A German geographer and philosopher, Ernst Kapp, established a hydropathic institute in Sisterdale, Kendall County. Springs and wells varied in location, topography, vegetation, and properties such as temperature, mineral composition, and origin. About 100 years ago the appropriation of mineral waters for medicinal purposes grew so popular that thousands of people visited springs and wells yearly. More than 100 places developed into well-known resorts. In 1888 more than 6,000 baths were taken at Hanna Springs, a small, relatively undeveloped spring in Lampasas. In the early 1900s visitors to Mineral Wells, a town of 8,000 residents, numbered 150,000 annually. In the 1930s, 80,000 people visited Marlin annually. Texas resorts also attracted celebrities: Teddy Roosevelt visited Hot Sulphur Wells outside San Antonio, and Mineral Wells hosted, to name a few, Clark Gable, Tom (Thomas Edwin) Mix, Douglas Fairbanks, and J. P. Morgan.

Texas spas were unique among Texas towns and also different from resorts in the East. Daily life at these resort towns revolved around the waters. Architecture reflected the tradition. Pavilions and drinking fountains became gathering places for local citizens, depots attracted bands and drummers to meet trains, bathhouses set the scene for private ablutions, and large hotels employed big bands for entertainment. Other diversions included domino games, burro rides, picnics, and dances. Bathers overcame the fears attendant upon the theory of miasma-that harmful vapors association with swampy waters cause disease-to seek the sanative pleasures of the springs and wells. Osmotic exchanges with the water were supposed to benefit the body. Rheumatism, arthritis, and skin diseases were reportedly relieved more often than any other condition. 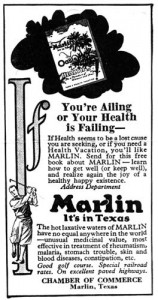 The use of mineral springs for therapeutic purposes declined for several reasons. Many hotels burned or were washed away by floods, and rebuilding them seemed inappropriate because medicine had begun to change. With the rise of “germ theory” and the discovery of sulfa drugs and antibiotics, the belief in the usefulness of mineral water diminished. Many doctors supported water cures, but some began to eschew balneology, the science of bathing, because of some resorts’ extravagant claims. In Marlin the tradition lasted into the 1960s, primarily because the medical profession appropriated the practice and transformed it into a tool for physical therapy. Other factors, such as war and depression, also hurt resorts. The railroad guaranteed the success and demise of some resorts. Tioga was founded where railroad workers stopped to drink the water. Hanna and Hancock Springs boomed after the railroad arrived at Lampasas, but when the terminus moved farther west, the popularity of the springs began a precipitous decline. The waters specifically influenced the settlement of certain towns. Mineral Wells, Tioga, Sutherland Springs, and Wootan Wells owed their existence to their waters. Economies of other towns, such as Marlin, San Antonio, and Lampasas, partly depended upon the fact that people considered them healthful places to visit.

“Taking the waters” was a site-specific activity, but it also included consumption away from the resort. Many waters that are now sold commercially come from Texas springs. Tioga, Wootan Wells, and Marlin bottled their mineral waters. In 1910 Mineral Wells was the largest shipping point for mineral water in the South, with yearly shipments of more than three million bottles to cities in the South and Midwest. In 1914 fifteen companies bottled Texas mineral water. One company still bottled the water of Mineral Wells in 1990, and some people continued to believe in its health-promoting qualities. Taking the waters may not be as popular in Texas as it once was, but the practice still exists. People do it at Stovall’s Hot Wells in Jack County and Kingston Hot Springs in Presidio County. Visitors to Big Bend National Park often sit in the ruins of J. O. Langford’s bathhouse beside the Rio Grande, where hot springs continue to flow. 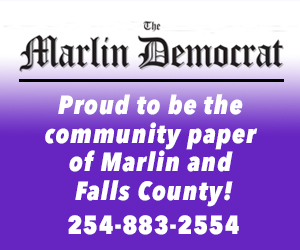 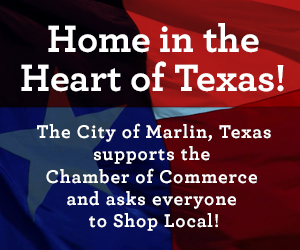